It was a sight that touched the heart of archaeology MA student Kelsey Pennanen as she visited Siksika Nation Outreach School in May, teaching its Blackfoot Confederacy students the basics of archaeology.

She felt a lump in her throat as she watched a young Blackfoot couple reconstruct a full bison skeleton, as per the day’s lessons. The couple had brought their baby to the class and the mother gently set the infant onto the foam mat as she and her partner built the skeleton around the newborn.

“They had their baby laid out where the bison’s tummy would be and I watched her looking up at her parents and smiling at them,” says Pennanen, who runs the Aboriginal Youth Engagement Program, a component of the University of Calgary’s Program for Public Archaeology, which wrapped up for another season earlier this month.

“I was almost in tears watching that interaction. It’s so rewarding and fulfilling seeing these students get so excited about the program. It means so much to these families and their communities.”

At the end of May, students from Siksika Nation Outreach School — a program that helps Siksika people between the ages of 16 and 21 finish high school at their own pace — connected with their heritage in a rare and meaningful way by taking part in an archaeological excavation at Cluny Fortified Village, located near the Blackfoot Crossing Historical Park and Interpretive Centre. The excavation is pictured above.

They did so as part of the University of Calgary’s Program for Public Archaeology, which allows members of the public to participate in the ongoing excavation of the Cluny Fortified Village site, near soyohpoiwko the Ridge-Under-Water, or Blackfoot Crossing, on Blackfoot territory.

A young Blackfoot couple reconstruct a full bison skeleton, gently placing their baby in the centre.

As an extension of that initiative, the Department of Anthropology and Archaeology launched the Aboriginal Youth Engagement Program last year, in which they invite students from Indigenous high schools to take part in the archaeological dig.

In keeping with ii’ taa’poh’to’p, the University of Calgary’s Indigenous Strategy, the Aboriginal Youth Engagement Program was an important step for the university’s longtime archaeological field school on the Blackfoot territory as it encouraged a positive working relationship with Siksika Nation, allowing its people to connect with their past.

This year that connection was strengthened. The program included seven schools, among them Siksika Nation Outreach School, Siksika Nation High School and students from the Blood Tribe’s Park and Recreation Department.

Siksika’s Old Sun College also took part. Pennanen and her field school colleagues reached out to Kayihtsipimiohkitopi (Kent Ayoungman), a ceremonial knowledge keeper based at the college, to gain his insight on how to respectfully incorporate Blackfoot culture and perspectives into the program.

On May 8, Old Sun College hosted students from the archaeology field school and the Aboriginal Youth Engagement Program for a traditional Blackfoot ceremony, before ground was broken on the Cluny site for another year.

“I think they’re really appreciative that we’re taking these steps towards reconciliation,” says Pennanen. “We’re really trying to incorporate more Indigenous content into our activities. We’re acknowledging that there is a protocol we should follow. There is a ceremony to be had. This is important and I know our Blackfoot partners are very grateful for this. Kent Ayoungman expressed this at the ceremony and we’ve been so grateful to have him guide us through this learning process.”

As the only known prehistoric fortified village on the Canadian Plains, the Cluny Fortified Village is a site of great historical and archaeological significance. First excavated in 1960, the site provides a unique example of migration, trade, and contact between cultures within Blackfoot Territory and the Canadian Plains. The University of Calgary has run an archaeological field school at Cluny Fortified Village for the past 13 years. The Program for Public Archaeology was started in 2014.

While the program was always respectful of the Blackfoot residents whose past was being excavated at the Cluny Fortified Village, Pennanen says there needed to be a stronger partnership in place between the university and local Indigenous Peoples.

“Archaeology is an investigation of the past and the people living on this landscape, for most of its history, were First Nations people,” she says. “For too long, archaeologists were not including them in their activities. This is a big step towards fixing that, by including traditional Indigenous knowledge into our programming.”

She adds that the field of archaeology has much to gain by training Indigenous archaeologists. “They provide a rich perspective, and this is a big step towards getting young Indigenous people excited about the discipline,” she says.

“There’s also the idea of stewardship,” says Pennanen. “A crucial part of archaeology is the protection of these sacred sites. And when people recognize the importance of these sites it helps us all work together to act as stewards of the land and protectors of this proud heritage.”

For more information or to take part in the program, email ark.engagement@ucalgary.ca or visit the website.

Do you have a project in mind to help the vision of ii’ taa’poh’to’p? Students, faculty and staff can apply for a grant of up to $10,000 to Indigenize and decolonize our campus. Deadline is June 30. 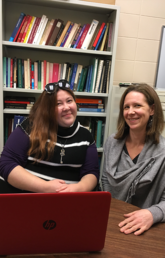