Dr. Añiela dela Cruz is looking at the impact of mandatory HIV screening during the Canadian immigration application processes

As part of the Canadian immigration application processes, mandatory HIV screening has been in place since 2002. While Añiela dela Cruz started her research career examining how the perception of HIV/AIDS changes as people cross borders and implications for transmission and infection, she is now exploring the impact this policy has on people living with HIV.

dela Cruz is part of the Newcomer, HIV, Immigration, Treatment Engagement and Stigma in Canada (NewHITES) Community-Based Research Team, leading a national study looking at internalized stigma experienced by African and Caribbean immigrants living with HIV and the experience of this mandatory HIV screening.

The study also found that nearly half of respondents learned about being HIV positive for the first time during the medical exam. “It appears that many people we worked with were experiencing stigma during the mandatory HIV screening process of immigration exams and not consistently getting connected to services during the migration and settlement process,” says dela Cruz.

dela Cruz says the long-term aim of her team’s research is to explore new approaches in providing HIV prevention, care and support services for this particular newcomer population.

“We’re looking at HIV stigma in the context of migration and settlement, and the other layer is immigration process and policies,” she says. “Once we have that info, we can start planning for an intervention. The goal is to have programs that better support people and newcomers who are living with HIV in Canada.”

What's next: NewHITES’s next project will focus on designated panel physicians overseas who conduct mandatory HIV testing during the Canadian immigration medical exams.

In the News: UCalgary

Nursing professor joins leading professional forum for science, practice and education in the field of pain 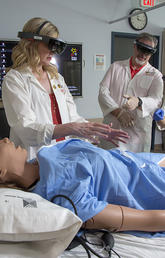