Lost? Neuroscientist’s training program could get you going in the right direction

An image from Centerville

Twelve years ago, Dr. Giuseppe Iaria, PhD, put himself on the map as an internationally renowned researcher in the field of cognitive neuroscience when he discovered a condition currently known as Developmental Topographical Disorientation (DTD).

Media outlets from around the world were fascinated by this rare disorder, suffered by an estimated one per cent of the population, which deeply impairs their sense of spatial navigation and orientation. These people are perpetually lost, even in the most familiar of environments, despite otherwise well-preserved cognitive functions and no brain injuries.

The 12-day computerized training program, which stimulates the critical skills needed for spatial navigation and orientation, began as the master's thesis of one of Iaria’s PhD students, Michael McLaren-Gradinaru, lead author of the paper recently published in the medical journal Frontiers in Human Neuroscience.

“The training program takes place in a small virtual town, which we’ve called Centerville,” explains Iaria. “You begin based in your apartment and from there you’re instructed to make your way to various destinations in the town. You start by going to a store close by, and then reaching places that are farther away from there. With each journey, the program records the time it took and the distance you travelled, and if it doesn’t match the ideal path and time, you have to make the journey again, repeatedly.

“As participants make their way through Centerville, they’re training their brains in a way that makes them think about the spatial relationship between different landmarks within the virtual town,” says Iaria. “This helps develop their ability to form cognitive maps.”

The 12-day program harkens back to the way in which young children develop their navigational skills, notes Iaria. “When you’re a young child, you move in a very small environment and you start making spatial relationships between different places within that environment. It usually starts with the child’s house, and then the environment expands further and further — to the school, the neighborhood — and as those skills are developed, people start covering larger distances.”

But these skills aren’t as developed in some individuals. In the extreme are DTD sufferers, who are never able to make the necessary spatial relationships in their mind to form cognitive maps.

Iaria clarifies that at this stage, the findings of the study are preliminary. The 15 test subjects who used the program were young and healthy, with no significant navigational shortcomings. These subjects were tested both before and after they took the training. Iaria’s team found that their ability to form cognitive maps improved significantly after their 12 days in Centerville.

Help for those who struggle to form cognitive maps

“We believe that if our program works with the normal population it will also help people who have problems, not only individuals with DTD but also seniors and anybody who struggles to form cognitive maps,” says Iaria. The next step is to test the program on those with spatial navigation and orientation challenges.

The Centerville training program is available online. Potential participants will be asked to register on the website and take a battery of online tests as a pre-training assessment. Those in need of the training can then participate in the 12-day program. Iaria and his team will be collecting data from the participants for further study.

“Centerville could be beneficial to a lot of people,” says Iaria. “It will help that one per cent of the population who have DTD, and it will also be valuable to those who struggle significantly with their sense of direction. This is a problem for millions of people, including those impacted by age. It would be of great help to them all.”

Led by the Hotchkiss Brain Institute, Brain and Mental Health is one of six strategic research themes guiding the university towards its Eyes High goals.

Images from Centerville, the program that will help people improve their navigational skills. 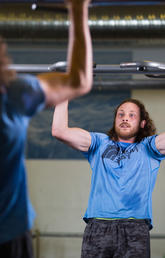 Athlete uses his own body to study embodiment in sport 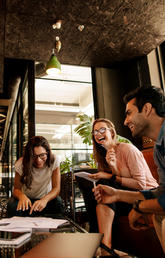 How do you inspire students to innovate? FutureU